Home » blog » When Will We Bridge The Pharmacological Treatment Gap in Obesity?

When Will We Bridge The Pharmacological Treatment Gap in Obesity? 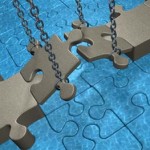 Readers will recall my recent post on how even modest sustained weight loss (in the 3-10% range) can reduce cardiovascular events in high-risk obese patients (Stage2/3).

In contrast, patients requiring sustainable weight loss of 20% or greater, may, more often than not, need to seriously consider bariatric surgery.

This leaves a wide ‘therapeutic gap’ for patients requiring sustainable weight-loss in the 5-20% range, which lies beyond what can be generally achieved with lifestyle intervention alone but well below the degree of weight loss that would suggest the need for surgery.

Addressing this ‘gap’ is now widely recognised as one of the most pressing unmet needs in chronic disease management, a need that recently prompted the US Senate’s Appropriations Committee to declare itself  “concerned with the absence of novel medicines to treat obesity” and call the lack of obesity drugs “a significant unmet medical need”.

One of the few options on the horizon may be Qnexa, a fixed-dose combination of phentermine and controlled-release topiramate, that recently refiled for FDA approval after being sent back to the drawing board in 2010, mainly due to lingering concerns around the potential teratogenicity of topiramate.

However, despite these concerns, Qnexa may be one of the few agents that could potentially help address this therapeutic gap in obesity management.

A recent publication on Qnexa by Timothy Garvey and colleagues, in the American Journal of Clinical Nutrition, certainly allows room for guarded optimism.

This paper presents the results of SEQUEL, a 52-week extension of CONQUER, a previously published 56-week placebo-controlled, randomised double-blind study of placebo, 7.5 mg phentermine/46 mg controlled-release topiramate (7.5/46), or 15 mg phentermine/92 mg controlled-release topiramate (15/92)] in addition to lifestyle modification. Of 866 eligible subjects from CONQUER, 676 (76%) elected to continue for a second year SEQUEL on their assigned treatments.

Thus, Qnexa clearly has the potential to bridge that elusive 5-20% therapeutic weight-loss gap between lifestyle intervention and surgery.

Notably, active treatment was also associated with improvements in cardiovascular and metabolic variables and even reduced rates of incident diabetes (annualised event rates dropping from 3.7 on placebo to 0.9 on 15/92).

While the participants randomised to active treatment did experience more drug-related adverse (‘side’-) effects (e.g. constipation, paresthesia, dry mouth, etc.), these were fully consistent with the known profile of the respective drugs (phentermine and topiramate), both of which have been on the market as single agents for decades (phentermine for weight loss and topiramate for migraines and convulsive disorders).

But then, nobody really expects anti-obesity drugs to be completely free of side-effects. As with bariatric surgery, the question ultimately comes down to a risk/benefit assessment — the question is never whether a treatment is risky or not — the question is always whether or not risk of treatment outweighs the risk of not treating.

I believe it is fair to say that no anti-obesity drug will ever be safe enough to be used by people who don’t need it — this, however, does not mean we should continue denying effective treatments to those who do.

Disclaimer: I have received consulting and speaking honoraria from various pharmaceutical companies, including Vivus, the maker of Qnexa.