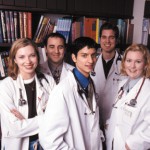 As classes reopen and students flock back to their classes, here is an article that may be of particular interest to medical education.

In this study, published online in the International Journal of Obesity, Susan Persky and Colette Eccleston examined medical students’ care recommendations for an obese versus non-obese virtual patient.

A total of 76 clinical-level medical students were randomly assigned to interact with a digital, virtual female patient who was visibly obese or non-obese.

Students revealed more negative stereotyping, less anticipated patient adherence, worse perceived health, more responsibility attributed for potentially weight-related presenting complaints and less visual contact directed toward the obese version of a virtual patient than the non-obese version of the patient. Visual contact is a proxy for eye contact, a behavior that is linked to empathy expression by providers.

Interestingly though, there was no clear evidence of bias in clinical recommendations made for the patient’s care.

Student BMI was also not a significant predictor of the results of the analyses. Thus, students who had higher BMIs did not exhibit lower levels of bias.

As the authors point out, “Biases in attitudes, beliefs and interpersonal behavior have important implications because they can influence the tone of clinical encounters and rapport in the patient-provider relationship, which can have important downstream consequences.”

I, for one, am not sure that the results of this study would have turned out that differently for students of other health professions. Guess it is never early enough to start addressing this issue.