Home » blog » Weighing in on Marathons

Weighing in on Marathons 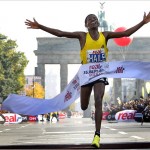 Yesterday morning, as I headed to the Berlin airport to catch my flight back to Edmonton, the city was waking up to its 35th Marathon. This yearly event, which this year boasted a field of more than 40,827 athletes from 107 nations, is one of the most spectacular with about one million people lining the course. The start and finish areas are located next to Germany’s most famous landmark: the Brandenburg Gate.

By the time I arrived back in Edmonton, the race had been run, establishing a new marathon world record by 35-year-old Haile Gebrselassie (Ethiopia) of 2:03:59, who slashed 27 seconds off his own world record, set in the same race last year (this was the third straight win of Gebrselassie in Berlin).

Readers of my blog perhaps know that I am not a great fan of excessive sports as I am not convinced of their health benefits or their role in promoting a healthy lifestyle. Yes, as blogged before, there are indeed numerous potential benefits of healthy active living, which should include daily bouts (totaling 30-60 mins) of moderate activity. There is, however, little evidence that anything beyond that is required to improve health. Indeed, for many – especially for those carrying around extra weight – the danger of injury and strain may outweigh any short-term health benefits. Sadly, my clinic is full of former athletes, where injury-related cessation of sports resulted in significant and often uncontrollable weight gain.

Here are some of the health risks of (preparing for and) running a marathon:

Most of these problems are the direct result of overuse or overtraining injuries that can be prevented by cutting back, or even better, not overdoing it in the first place.

Remember, as with calorie-restricted diets, increased physical activity, if used as a treatment for obesity, has to be sustainable – it is but a few (lucky?) individuals who can get away with extreme levels of exercise year after year after year. For the vast majority the level of training and commitment required to run a couple of marathons a year are neither sustainable nor healthy.