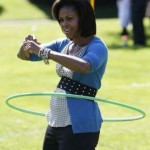 Later today, Michelle Obama will step in front of the press in Washington to launch her initiative on addressing the childhood obesity epidemic in the US.

I am certain that she has no illusions as to the size of this challenge (no pun intended).

I will not go into details about the planned campaign or the considerable obstacles that she will need to overcome (for a thoughtful discussion of this go to the Canadian Press article by Nancy Benac).

Rather I’d like to turn my gaze to Canada and dare to ask the question: Where is the prominent Canadian public figure that is prepared to stand up and head a Canadian strategy to match Obama’s efforts?

If the US has an obesity problem, so do we!

If the US is now going to seriously take on this issue, so must we!

As Director of the Canadian Obesity Network, I can assure anyone willing to step forward that the Network with its over 4000 members and partners stands prepared to take up the challenge.

Any prominent Canadian public figure wishing to follow in Obama’s footsteps is welcome to simply step forward and drop me a line.

In the meantime, I will be carefully watching to see if the US initiative actually has enough support and teeth to really take on the countless interest groups and stakeholders that are perfectly happy with leaving things just the way they are.

Send me your comments on why you think so far no Canadian public figure has stepped forward to spearhead a campaign to address our own obesity epidemic and whether or not you think this would really make a difference.