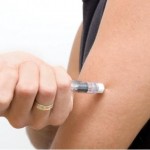 Over the past two days, I have been discussing the role of leptin in the physiology of human energy regulation.

I discussed the fact that much of the hypometabolic and orexegenic response to weight loss can be attributed to a fall in leptin levels below a leptin ‘threshold’.

I also discussed findings that replacing leptin can attenuate the hypometabolic and orexogenic response to weight loss, thereby potentially making it easier to keep weight off.

So how good is the evidence from leptin treatment studies and why has leptin not found its way into clinical use for obesity management?

First of all, this is not because leptin is not available or ineffective in humans.

Leptin is highly effective in promoting weight loss in rare individuals with congenital leptin deficiency and can dramatically correct diabetes and other metabolic problems in individuals, who lack leptin due to lipodystrophy.

But, as discussed in yesterday’s post, simply injecting leptin (even at higher doses) in obese individuals does not necessarily result in appreciable weight loss – so leptin alone cannot be a ‘weight-loss’ treatment.

Rather, if at all, it would have a role in the prevention of weight regain.

This idea was nicely demonstrated by Leibel and colleagues in a now classic paper published in the Journal of Clinical Investigation in 2005.

In this study, 10 inpatient subjects (5 males, 5 females [3 never-obese, 7 obese]) were examined under 3 sets of experimental conditions:

In a subsequent study from Leibel’s lab also published in the Journal of Clinical Investigation in 2008, leptin was shown to reverse the increased neuronal activity in brain areas known to be involved in the regulatory, emotional, and cognitive control of food intake.

Thus, together, these studies strongly suggest that the weight-reduced state may be regarded as a condition of relative leptin insufficiency and that prevention of weight regain might be achievable by reversing this leptin-insufficient state, in this case by replacing leptin.

This idea was taken a step further by Amylin and Takeda, who partnered in a clinical development program on a combination of pramlinitide, an analogue of the hormone amylin, released by the pancreatic beta cell and involved in glucose homeostasis and satiety, and metreleptin, a recombinant leptin analogue.

After promising results in early studies (with about 13% weight loss), this program recently ran into problems due to the appearance of antibodies to metreleptin in a couple of trial participants. It is not clear when or if this development program will continue.

This, in short, is the current status of leptin as a treatment for obesity and one will have to see how this development program moves forward.

Nevertheless, it also seems prudent to determine whether there could in fact be a regulatory pathway to license a drug for weight-loss maintenance.

I, for one, have no doubts that many individuals who have lost serious amounts of weight would probably be quite open to the idea of having to resort to daily injections to keep the weight off and would perhaps even prefer injections to having bariatric surgery.

Disclosure: I have received consulting honoraria from Amylin/Takeda the makers of pramlintide/metreleptin