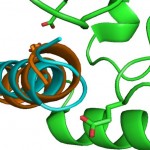 This week, a group of researchers working from Munich, Germany and Indiana, USA, report, what may be a major breakthrough in the treatment of obesity and type 2 diabetes.

In their paper, published in Nature Medicine, the researchers use a range of sophisticated experiments to demonstrate that a novel peptide, which combines agonistic actions of three hormones (GLP-1, GIP and glucagon) into a single molecule, can fully reverse diabetes and reduce body weight by over 30% in mice.

Despite this just being a mouse study, the triple combination findings are no accident. Rather, these researchers have rationally designed this molecule based on the known actions of these three hormones.

As the authors describe it, their finding

According to their report, this “designer” peptide,

Similar activity in humans would indeed represent a breakthrough, potentially providing a medical treatment that may be as (if not more) potent than bariatric surgery.

While the path to human development is generally long and stony, there are at least some folks who are optimistic: the molecule has been licensed to  Marcadia Biotech Inc., now fully owned by the Swiss pharma giant Roche.

Clearly, this will be an exciting space to watch.