The Molecular Mechanism of Sleeve Gastrectomy 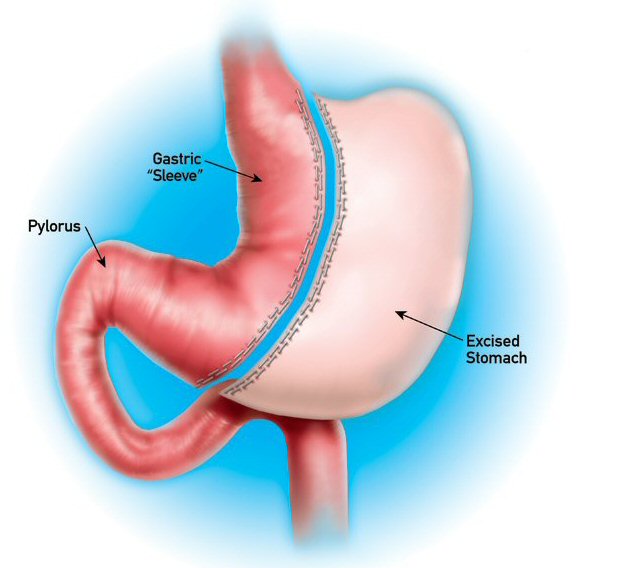 In recent year, vertical sleeve gastrectomy (VSG), which involves removing large parts of the stomach, thereby reducing it to the size of a small banana, has gained in popularity in bariatric surgery.

Although slightly less efficacious, it is a far simpler procedure to perform than the “classic” Roux-en-Y gastric bypass.

According to popular wisdom, the reason why VSG works has to do with mechanically reducing the volume of the stomach (thereby creating a physical “restriction”), whereby effect on gastric ghrelin secretion may or may not also play a role in reducing hunger (the science on this is somewhat unclear).

Now, a paper by Karen Ryan and colleagues from the University of Cincinnati, published in Nature, provides a completely new explanation for the molecular mechanism by which this surgery appears to work.

The study was prompted by the observation that VBG leads to profound changes in circulating bile acids. Bile acids are now known to bind to a nuclear receptor (farsenoid-X-receptor or FXR for short) which plays an important role in fat and glucose metabolism.

Using a rather elegant series of studies in mice, Ryan and colleagues demonstrate that the weight loss effect of sleeve gastrectomy has little to do with reducing the size of the stomach. Rather, almost all of its effect on body weight appears to be mediated by the effect of this surgery on circulating bile acids and accompanying changes in gut microbial flora.

The researchers also clearly demonstrate that much of the weight loss with SVG is dependent on a functional FXR, without which (as in FXR knockout mice) the surgery has little effect on body weight or glucose metabolism.

This demonstration of the importance of bile acids and FXR signalling as an important molecular mechanism for why VSG actually works is important because it means that this surgery could possibly be mimicked by pharmacological interventions that target bile acid and/or FXR.

In fact drugs that stimulate FXR (e.g. obeticholic acid) are already being considered for other indications including fatty liver disease and type 2 diabetes.

Given the remarkable efficacy of VSG surgery, the possibility of providing the same benefits in a pill are clearly attractive.