Home » blog » The Biology Of The Food Coma

The Biology Of The Food Coma 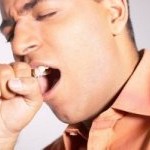 Feeling ready for a nap after a meal is part of normal human physiology – but how exactly does this happen?

Now, Christophe Varin and colleagues from the Centre National de la Recherche Scientifique, Paris, France, in a paper published in the Journal of Neuroscience describe how glucose regulates key neurones in the brain to induce sleepiness.

Their studies in mice focussed on sleep-active neurons located in the ventrolateral preoptic nucleus (VLPO), critical in the induction and maintenance of slow-wave sleep (SWS).

Using both in vivo and ex vivo patch clamp studies, the researchers show that a rise in extracellular glucose concentration in the VLPO can promote sleep by increasing the activity of sleep-promoting VLPO neurons.

As the researchers note,

“The extracellular glucose concentration monitors the gating of KATP channels of sleep-promoting neurons, highlighting that these neurons can adapt their excitability according to the extracellular energy status… Glucose-induced excitation of sleep-promoting VLPO neurons should therefore be involved in the drowsiness that one feels after a high-sugar meal. This novel mechanism regulating the activity of VLPO neurons reinforces the fundamental and intimate link between sleep and metabolism.”

Apart from helping unravel the biology of a phenomenon that every parent of a young child is well aware of, this research raises a number of interesting clinical questions.

Does overconsumption of high-sugar foods necessitate counteracting these effects with caffeine? Is this why sugar-sweetened pop generally contains caffeine (to not put you to sleep)?

Does this also explain the practice of eating a bedtime snack to fight insomnia?

And what does this mean for people with poorly controlled diabetes: do they need to drink more coffee than people without diabetes to get through their day? (not something I’ve heard of).