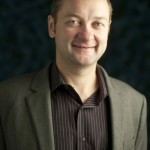 This week the CON-SNPs are hosting the 3rd Canadian Obesity Student Meeting (COSM) here at the University of Alberta.

Following a rather tight morning of oral presentations and posters, the noon Key Note talk was given by Jon McGavock, Robert Wallace Cameron Chair in Child Health Research and CIHR New Investigator at the University of Manitoba’s Institute of Child Health.

His talk on “Understanding and Preventing Type 2 Diabetes in Youth” portrayed his ‘journey’ as a young researcher.

He took care to begin his talk by warning the audience that his presentation was likely to be biased heavily towards the benefits of exercise (as an avid exerciser and runner himself) and to the Jets.

McGavock remembers that not all too long ago, he was simply a ‘lonely exercise physiology student’ at the University of Alberta, when he fortunately managed to get support from the TORCH program, which helped kickstart his research career, taking him now to the University of Manitoba, where he is now focusses on type 2 diabetes in kids.

Manitoba, it turns out has the highest incidence of type 2 diabetes in kids in all of Canada with about 75 new cases diagnosed in 2010 (i.e. more than one new case per week).

In 2007 he studied 841 youth form eight Alberta middle and high schools who were assessed with accelerometers and various lifestyle and risk factors. Individuals in the lowest tertile of waist circumference, had no significant difference in light to moderate physical activity but about eight minutes a day more of vigorous physical activity.

During a post-doctoral fellowship at the University of Texas, Southwestern Medical Centre in Dallas, he performed MRI spectroscopy studies in lipodystrophic individuals focussing on the deposition and health effects of ectopic fat.

In a CIRCULATION paper he published in 2007, he showed a clear relationship between the risk for diabetes and the amount of liver and myocardial fat in adults. In a subsequent paper just published in OBESITY, he showed that prediabetic and type 2 diabetic kids also had more fat in their livers as well as lower fitness levels. In fact, in a paper just out in DIABETES CARE, he showed that hepatic steatosis is indeed associated with type 2 diabetes risk factors independent of cardiorespiratory fitness, whole-body adiposity, and visceral fat mass.

He ended with a fascinating story on participatory research in Aboriginal communities in Manitoba.

Overall a very engaging talk, which was most well received by the students and young researchers at the meeting especially as he ended by reminding the listeners that the most important product of any lab are the people who train there – more important than any papers or research findings that may or may not come out of the group.