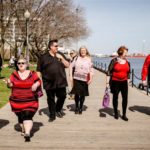 This week, the Canadian Obesity Network will host its 5th National Obesity Summit in Banff, Alberta. While the formal program begins on the evening of the 26th with the delivery of Award lectures, there are plenty of pre-conference workshops to chose from.

One such workshop is the strategy meeting of the Network’s Public Engagement Committee, which will meet in person to discuss the Network’s public engagement strategy.

As reader may know, this committee was formed two years ago at the last Canadian Obesity Summit in Toronto (image) and has been extremely active since in helping plan and provide direction for the Network’s activities to tie in and meet the interests and needs of the nearly 7,000,000 Canadians living with obesity.

It is fair to say, that their voice has been largely ignored in the policy discussions around obesity prevention and management and there is little evidence that Canadians living up with obesity are speaking up for themselves.

This is a crying shame, as who should know more about the realities and challenges that Canadians living with obesity face everyday in settings including education, workplace, and society in general? Unfortunately, the challenges also extend to health care – as will become evident from the Report Card on Access to Obesity Treatments in Canada, which will be released at the Summit later this week.

With this work, the Network is following closely in the footsteps of the Obesity Action Coalition and the EASO Patient Council to provide a voice at the table for Canadians living with this chronic disease.

I look forward to a most exciting and informative week.