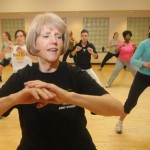 Yesterday, we met Mark (as a prototypical representative of the National Weight Control Registry), who, deciding that enough was enough, managed to turn his weight around with a self-directed regimen of eating less and moving more (ELMM).

Today, we meet Julie (whose story I also made up), another prototypical weight-loss maintainer, who believes most vehemently in the power of exercise for weight control.

According to Lorraine Ogden’s paper published in OBESITY, Julie, is part of the largest cluster, which makes up just over half of all National Weight Control Registry participants.

Julie, is 48 years old, married, works full-time as a business executive, has two teenage children and has managed to maintain a weight loss of 62 lbs over the last six years, with remarkably little fluctuation.

She has always been relatively healthy, even at her highest weight.

She began gaining weight in high school and reports her mother as also being slightly overweight.

Over the years, Julie had made several previous weight-loss attempts with commercial programs but she does not attribute her current success to any specific program or contact with a health professional.

Rather, her “secret” formula is a rather impressive amount of exercise, easily expending almost 3000 Cal per week in 90 minutes or more of daily ardous exertion.

Apart from her daily runs and/or rides on her bike, she teaches a weekly Zumba class at the local YMCA and simply cannot emphasize enough how physical activity (which she now loves more than anything else) has changed her life.

Although, this rigorous exercise regimen is supported by weighing herself regularly, only keeping healthy foods around the house, and strictly limiting her caloric intake to below 1400 calories, it is ultimately the exercise that Julie believes is her “key” to success.

She is currently very happy with her weight, reports her mood as good and her stress levels as manageable.

Julie, is the dream of the fitness and sports utility industrial complex. She and her cluster mates are the ones most likely to have taken up a serious regimen of activity that now rules their lives.

It is therefore not surprising to learn that Julie is currently training for her second triathlon and wants to get in at least two marathons this year. This Summer vacation will be a visit to France, where she hopes to complete four segments of the Tour de France. For next year, she is contemplating riding her bike from Sacramento to Seattle to raise money for Breast Cancer research.

We all know people like Julie – their determination and drive is unparalleled and awe-inspiring – and, they are somewhat hard to be around (unless of course you happen to share their passion for physical activity).

The Julies that I have personally met, are surprisingly often also foodies – indeed, most things appear to somehow revolve around physical activity and food – the more intense and wholesome, respectively, the better – good for them!

I do not see a lot of Julies in my practice (at least not as patients) – they don’t need me – they are no doubt happier with their personal coaches, sport buddies and farmer markets.

Indeed, should Julie ever need the services of a doctor, it will more likely be from an orthopaedic surgeon than a bariatrician.

If you know of a Julie or perhaps happen to be a Julie yourself, I’d love to hear your story.