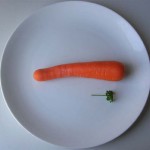 Now that we have met Mark, the Golden Boy of Weight Loss, and Julie, the Fitness Enthusiast, we turn our attention to Gertrude, the Poor Eater.

According to Lorraine Ogden’s paper in OBESITY, people like Gertrude (who I invented) would make up about 10% of National Weight Control Registry participants.

Gertrude, is 53 years old, works as a retail clerk, and is divorced. Her current BMI is 26, down from 37 almost six years ago. Like Julie, Gertrude also began gaining weight in her late teens and has parents, who are slightly overweight.

In contrast to Julie, who was has always been relatively healthy, Gertrude has a history of high blood pressure, arthritis, “poor” thyroid function and mild depression.

Gertrude also has a lengthy history of weight loss attempts but only once tried a commercial weight-loss program. It was only after consulting with her physician and a psychologist and joining a self-help group (run in her Church basement), that she managed to “conquer” her weight.

Unlike Golden Boy Mark and Fitness Enthusiast Julie, Gertrude made no change to her physical activity levels. In fact, she barely gets a 100 Cals a day from exercise (if you can call it that).

Her “secret” essentially consists of not eating very much. She often eats only a couple of meals a day and reports getting more of her 1300 daily calories from fat and fewer from carbs. Yet, she feels that she can eat whatever she wants, often does not feel very hungry and seldom has cravings.

All in all, Gertrude is happy with her current weight and lifestyle although she continues to struggle with mild depression.

The Gertrudes of this world are not all that rare in clinical practice. They often report not eating much to begin with and do not appear to have much trouble eating even less. They are certainly not the ones to take up any form of regular or rigorous physical activity – they would rather simply focus on eating (even) fewer calories.

In my experience, depression and often pain is a common problem with Gertrudes and once this is effectively managed, cravings are generally well controlled.

Gertrude is definitely not a “foodie” and will be quite happy eating pretty much the same foods everyday.

Gertrudes, respond well to support systems (e.g. TOPS or Weight Watchers), which often become an important part of their social life. Connecting Gertrude to such groups is often the best help we can give them.

Unfortunately, Gertrudes, although more commonly seen in clinical practice, are even rarer than the Golden Boys and Girls like Mark, making up only about one in ten registrants in the NWCR.

If you know people like Gertrude, I’d love to hear about them.

Leave a Reply to runner and maintainer Cancel reply