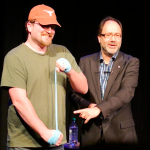 I remember as a kid having a pair of pyjamas that were held up by an elastic rubber band.

It must have been a pretty cheap rubber band, because every few months it would wear out and lose its stretch, so it had to be replaced it with a new band.

Unfortunately, this is not what can be said about the rubber band that I used in my recent TEDx talk to demonstrate what happens when you try to lose weight.

Unlike the cheap band in my pyjamas, the rubber band I used to represent our physiology trying to gain the weight back, never seems to lose its stretch.

No matter how hard or how long we pull, the rubber band keeps wanting to bring our weight back to where we started.

Yes, perhaps for some people, eventually the rubber band may relax (these would certainly be the exceptions) or may be the “muscles” that we use to pull on the band just grow stronger, which makes it seem easier to keep up the pull – but for all we know, in most people, this “rubber band” is of pretty good quality and seems to last forever.

So, how do we take the tension out of the rubber band ?

Well, we do know that people who have bariatric surgery have a much better chance of keeping the weight off in the long-term and we now understand that this has little to do with the “restriction” or the “malabsorbtion” resulting from these procedures but rather from the profound effect that this surgery has on the physiology of weight regain.

Thus, we know that many of the hormonal and neurological changes that happen with bariatric surgery, seem to inhibit the body’s ability to defend its weight and perhaps even appears to trick the body into thinking that its weight is higher than it actually is.

In other words, bariatric surgery helps maintain long-term weight loss by reducing the tension in the rubber band, thus making it far easier for patients to maintain the “pull”.

And that is exactly how we think some of the anti-obesity medications may be working.

For example, daily injections of liraglutide, a GLP-1 analogue approved for obesity treatment, appears to decrease the body’s ability to counteract weight loss by reducing hunger and increasing satiety, thus taking some of the tension out of that band.

Think of it as sprinkling “magic dust” on that rubber band to reduce the tension, which makes it easier for patients to maintain that pull thereby helping them keep the weight off.

Of course, both surgery and liraglutide only reduce the tension as long as you continue using them.

Undo the surgery or come off your anti-obesity meds and the tension in that band comes back as strong as ever.

For readers, who have no idea what I’m talking about, hopefully things will become clearer after you watch my talk by clicking here.