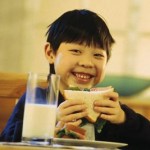 I have previously noted that the real problem with fast food is not so much the ‘food’ but rather the ‘fast’ – i.e. the fact, that it is designed to be eaten quickly.

I also, earlier this year, blogged about novel approaches like the MandoMeter or the SMART device to help people slow down their eating to better control their weights.

it turns out that the speed of eating may in fact be one of the earliest predictors of obesity, even in 4-year old kids.

Thus, in a study by Robert Berkowitz and colleagues from the University of Pennsylvania, published in the latest issue of OBESITY, rapid eating (higher number of mouthfuls per minute) of a single laboratory testmeal was a remarkably strong predictor of subsequent weight gain in kids.

At 4 years of age, 32 children of overweight mothers and 29 children of normal weight mothers were given a test meal in a controlled laboratory setting. Mouthfuls of food per min at this single meal not only predicted changes in BMI from 4 to 6 years but also changes in sum of skinfolds and total body fat.

As the authors note, rapid eating could well be an innate (genetic?) trait related to food reward and it will be interesting to see if slow eating can be taught and if this would reduce the risk for weight gain. Of course you can always trick your 4-year old into eating slow by providing slow foods that take longer to eat.

In the meantime, if your 4-year old prefers to play with her food and takes forever to finish, you can at least comfort yourself with the notion that she is probably not in danger of having to worry about excess weight any time soon.