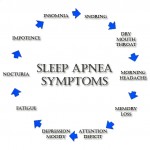 In follow up to yesterday’s post on the positive impact of CPAP treatment for obstructive sleep apnea (OSA) on weight and cardiometabolic risk factors, here is another study highlighting the importance of diagnosing and managing OSA in obesity patients.

This study by Anne-Laure Borel and colleagues from the Institut universitaire de cardiologie et de pneumologie de Québec, Québec, Canada, published in THORAX, the researchers show that OSA attenuates the effects of a lifestyle intervention programme in men with visceral obesity.

After the 1-year lifestyle intervention, despite similar compliance to the programme, the 28 men with sleep apnoea syndrome at baseline (ODI ≥10 events/h) showed smaller reductions in body mass index, waist circumference, triglycerides and smaller increases in HDL cholesterol and adiponectin than the 49 men without sleep apnoea.

In addition, the higher the baseline ODI and the time spent under 90% oxygen saturation, the lower the reductions in fat mass and visceral adiposity, and the smaller the improvement in glucose/insulin homeostasis indices after 1 year.

This finding certainly supports the notion that diagnosis and management of OSA has to be seen as an essential part of obesity management.

Here again (according to Helpguide) are the most common symptoms associated with sleep apnea:

Other common signs and symptoms of sleep apnea include:

Signs and symptoms of sleep apnea in children