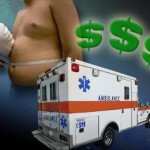 One of my favourite medical blogs is written by Kevin Pho (KevinMD), a Boston internist and avid blogger. KevinMD was voted the best medical blog of 2008 and has over 21,000 subscribers and 16,000 followers on Twitter.

While I agree with much of what Kevin blogs about, yesterday’s post got me up in arms (or rather the responses to a poll he posted on his site did).

The post was in regard to the question of whether or not obese patients should pay more for ambulance rides?

Understandably, ambulance workers say that patients weighing over 350 pounds present additional challenges to transport, and require specialized equipment and additional workers. Not unexpectedly the ambulance industry wants to pass on the expenses to insurance companies and even individual patients.

It turns out (accoding to Kevin) that some US states already charge more for transporting extremely overweight patients.

So what is my response to this poll?

My regular readers will probably already guess that I voted “No” and with that differently than the 78% of responders who opted for “Yes”:

While I fully appreciate that extremely large patients pose important challenges for amublance workers, I still maintain that (as with airline seats) the only fair rule can be one patient – one ride – one fare!

The whole notion that obese people should pay more, is nothing other than another expression of the widely held weight bias against overweight people that is entirely based on the assumption of choice and fault. As I have argued previously, neither choice nor fault (even if they were relevant to obesity) can be a criterium for deciding about costs.

If fault is a criterium, then how about charging people more who get into DUI accidents, injure themselves during risky outdoor activities or even just have heart attacks from smoking too much?

If this is about “fair” distribution of cost, I wonder if ambulances will next offer discounts on rides for people who walk to the ambulance and lay themselves down on the gurney (less work – less pay?).

Or will they also be charging higher rates for tranporting other folks who create more work, like people who don’t speak English, are psychotic, aggressive, or just making a mess of themselves by spilling blood and guts all over?

As a significant proportion of the population gets bigger, it is up to ambulances to up-size and adapt their services by providing the right equipment and the right personnel. If this costs more (as it probably will), the costs should be spread amongst all who require ambulance services and not simply passed on to a vulnerable minority that is already hit hard by the utter lack of access to obesity prevention and treatment options that work.

We all bear responsibility for creating an obesogenic environment in which some people will gain weight – no matter what.

To take Kevin’s poll and perhaps correct the voting balance in favour of fairness and compassion click here.