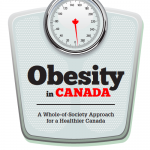 Earlier this week, the Canadian Senate released a report with the title: Obesity in Canada: A Whole-of-Society Approach for a Healthier Canada.

Yesterday, I aired my dissapointment about the fact that the authors missed the opportunity of displaying a true understanding of people living with obesity by using people first language.

Be that as it may, here are the 21 recommendations made in the report:

1) The committee recommends that the federal government, in partnership with the provinces and territories and in consultation with a wide range of stakeholders, create and implement a National Campaign to Combat Obesity which includes goals, timelines and annual progress reports.

3) The committee recommends that the federal government:
• Assess the options for taxation levers with a view to implementing a new tax on sugar-sweetened as well as artificially-sweetened beverages; and,
• Conduct a study, and report back to this committee by December 2016, on potential means of increasing the affordability of healthy foods including, but not limited to, the role of marketing boards, food subsidies and the removal or reduction of existing taxes.

4) The committee recommends that the Indigenous and Northern Affairs Canada immediately:
• Address the recommendations made by the Auditor General with respect to the Nutrition North program and report back to this committee on its progress by December 2016.

5) The committee recommends that the federal government conduct assessments of the Children’s Fitness Tax Credit, the Working Income Tax Benefit and the Universal Child Care Benefit with a view to determining how fiscal measures could be used to help Canadians of lower socio-economic status, including our Aboriginal population, choose healthy lifestyle options.

6) The committee recommends that the Minister of Health immediately undertake a complete revision of Canada’s food guide in order that it better reflect the current state of scientific evidence. The revised food guide must:
• Be evidence-based;
• Apply meal-based rather than nutrient-based principles;
• Effectively and prominently describe the benefits of fresh, whole foods compared to refined grains, ready-to-eat meals and processed foods; and,
• Make strong statements about restricting consumption of highly processed foods.

7) The committee recommends that the Minister of Health revise the food guide on the guidance of an advisory body which:
• Comprises experts in relevant areas of study, including but not limited to nutrition, medicine, metabolism, biochemistry, and biology; and,
• Does not include representatives of the food or agriculture industries.

8) The committee recommends that the Minister of Health prohibit the use of partially hydrogenated oils, to minimize trans fat content in food, unless specifically permitted by regulation.

9) The committee further recommends that the Minister of Health:
• Reassess the daily value applied to total carbohydrates based on emerging evidence regarding dietary fat and the fat promoting nature of carbohydrates;
• Ensure that the regulatory proposals for serving size have addressed all of the concerns raised by stakeholders during public consultation, and,
• Require that the daily intake value for protein be included in the Nutrition Facts table.

10) The committee further recommends that the Minister of Health assess whether sugar and starch should be combined under the heading of total carbohydrate within the Nutrition Facts table and report back to this committee by December 2016.

11) The committee recommends that the Minister of Health implement strict limits on the use of permitted health claims and nutrient content claims based on a measure of a food’s energy density relative to its total nutrient content.

12) The committee recommends that the Minister of Health:
• Immediately undertake a review of front-of-package labelling approaches that have been developed in other jurisdictions and identify the most effective one;
• Report back to this committee on the results of the review by December 2016;
• Amend the food regulations to mandate the use of the identified front-of-package approach on those foods that are required to display a Nutrition Facts table; and,
• Encourage the use of this labelling scheme by food retailers and food service establishments on items not required to display a Nutrition Facts table.

13) The committee recommends that the Minister of Health encourage nutrition labelling on menus and menu boards in food service establishments.

14) The committee recommends that the federal government increase funding to ParticipACTION to a level sufficient for the organization to:
• Proceed with Active Canada 20/20; and
• Become the national voice for Canada’s physical activity messaging.

15) The committee recommends that the Minister of Health and the Minister of Sport and Persons with Disabilities together use the recently established National Health and Fitness Day to promote the Canadian Physical Activity Guidelines.

16) The committee recommends that the Public Health Agency of Canada provide sustained or bridged funding for pilot projects that have been assessed as effective.

17) The committee recommends that the Minister of Health in discussion with provincial and territorial counterparts as well as non-governmental organizations already engaged in these initiatives:
• Encourage improved training for physicians regarding diet and physical activity;
• Promote the use of physician counselling, including the use of prescriptions for exercise;
• Bridge the gap between exercise professionals and the medical community by preparing and promoting qualified exercise professionals as a valuable part of the healthcare system and healthcare team;
• Address vulnerable populations, such as Canadians of lower socio-economic status including Canada’s Aboriginal population, and pregnant women;
• Advocate for childcare facility and school programs related to breakfast and lunch programs, improved physical education, physical activity and nutrition literacy courses; and,
• Engage provincial governments in discussions about infrastructure requirements for communities that encourage active transportation and active play.

18) The committee recommends that the federal government provide funding under the New Building Canada Fund to communities for infrastructure that enables, facilitates and encourages an active lifestyle, both indoors and outdoors.

19) The committee recommends that the Public Health Agency of Canada implement a strategy to increase the visibility, uptake and use of the Best Practices Portal by stakeholders across the country.

20) The committee recommends that Health Canada design and implement a public awareness campaign on healthy eating based on tested, simple messaging. These messages should relate to, but not be limited to:
• Most of the healthiest food doesn’t require a label;
• Meal preparation and enjoyment;
• Reduced consumption of processed foods; and,
• The link between poor diet and chronic disease.

21) The committee recommends that Health Canada and other relevant departments and agencies, together with existing expertise and trusted organizations, implement a comprehensive public awareness campaign on healthy active lifestyles.

So, while it is no doubt good to see the Canadian Senate take on the important issue of obesity, many of the recommendations, although sensible, may not be all that specific to obesity at all.

After all we can probably all agree that healthier eating and more physical activity would benefit Canadians, no matter what their weight.

Or, as I have often said, many of these policies should probably be implemented even if there was no obesity epidemic at all.

That said, it is somewhat disappointing to see that the Senate (and most likely the people and organisations that advised them) appear firmly locked into the “Eat-Less-Move-More” paradigm for obesity prevention and management.

it is almost as though the modern science on the complex socio-psycho-biology of obesity (including all of the important and world-class work done by obesity researchers across Canada) did not exist at all.

Imagine for example, a national diabetes or cancer strategy that did not also call for more investment into “finding the cure” or providing better (evidence-based!) treatments to Canadians living with diabetes or cancer.

Indeed, nowhere in the report did I see any mention of obesity as a chronic disease – something that the Canadian Medical Association and other organisations feel rather strongly about.

As noted in my previous post, I guess we will just have to wait to see which of these many recommendations will actually make it into legislation (my guess is don’t hold your breath for new dollars to better train health professionals in obesity management or in better access to care or more dollars for obesity research).