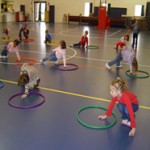 This may well be the case, at least according to a meta-analysis presented by Kevin C. Harris, a pediatrician at the BC Children’s Hospital in Vancouver (BC), presented at the American Academy of Pediatrics 2008 National Conference, just held in Boston, MA.

As reported by Katherine Kahn in an article published in Medscape, the meta-analysis failed to find any effect of school-based physical activity interventions on body mass index (BMI) or other anthropometric measures of overweight or obesity in children.

Dr. Harris and colleagues identified 398 studies initially; however, only 18 met all inclusion criteria, and 15 of those were amenable to meta-analysis. Ten of these were randomized controlled trials and 5 were nonrandomized controlled trials including data from 13,003 children aged 5 to 18 years. All studies involved school-based physical activity that took place only during regular class time. The minimum duration was 6 months. Half of the studies were shorter than 1 year in duration (range, 6 months – 3 years). Height and weight were measured before and after the intervention. The majority of studies included some type of co-intervention, such as diet, education, or family involvement.

Not only was there no effect on BMI but there was also no consistent improvement in any other measures of body composition, such as body fat percentage, skin-fold thickness, lean mass, waist circumference, or waist-hip ratio.

Sex, study duration, and trial quality had no effect on the results with results remarkably consistent across studies.

Apparently, Dr. Harris hurried up to point out that although there were no effects of physical activity on weight, there are of course numerous other beneficial effects of being physically active – a point with which I have always concurred.

Thus, while we should certainly be promoting physical activity in kids both in and outside of school, the widespread notion that this will be in any way effective in stemming or reversing the tide of childhood obesity is not supported by data. In fact, even if the studies had shown some effect on weight, I would have been very sceptical as to whether these differences would actually translate into less adult obesity.

Personally, I do not find this lack of effect at all hard to believe. Firstly, activity (unless taken to an extreme) is not the most effective way to either lose weight or prevent weight gain. Secondly, my obesity clinic (average BMI = 49) is full of former (childhood-) athletes, who have the medals, ribbons, trophies and certificates to prove that they were as active as anyone could wish to be through most of their childhood, adolescence and young adulthood (i.e. before injury or life caught up with them).

I would rather place my bets on addressing perinatal programming, eating patterns, nutritional hygiene, food addictions, or emotional eating any day.