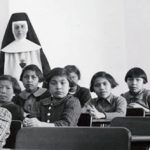 A recent CMAJ article, by Ian Mosby and Tracey Galloway from the University of Toronto argues that one of the key reasons why we see obesity and diabetes so rampant in Canada’s indigenous populations, is the fact that widespread and persistent exposure to hunger during the notorious residential school system may have metabolically “programmed” who generations toward a greater propensity for obesity and type 2 diabetes.

There is indeed a very plausible biological hypothesis for this,

“Hunger itself has profound consequences for childhood development. Children experiencing hunger have an activated hypothalamic–pituitary–adrenal stress response. This causes increased cortisol secretion which, over the long term, blunts insulin response, inhibits the function of insulin-like growth factor and produces long-term changes in lipid metabolism. Through this process, the child’s physiology is essentially “programmed” by hunger to continue the cycle of worsening effects, with their bodies displaying a rapid tendency for fat-mass accumulation when nutritional resources become available.”

While the impact of hunger may well have been one of the key drivers or metabolic changes, the authors failed to acknowledge another (even more?) important consequence of residential schools – the impact on mental health.

Oddly enough, in a blog post I wrote back in 2008, I discussed the notion that the significant (and widespread) physical, emotional, and sexual abuse experienced by the generations of indigenous kids exposed to the residential school system would readily explain much of the rampant psychological problems (addictions, depression, PTSD, etc.) present in the indigenous populations across Canada today.

The following is an excerpt from this previous post:

This disastrous and cruel [residential school] policy resulted in much pain and despair in the First Nations’, Inuit and Metis people that lasts to this day (known as the “generational effect”). Sexual, physical and mental abuse was widespread; students were broken in heart and spirit; culture and identities were destroyed.

Obesity is never an issue of “choice”. I have yet to meet anyone who “chooses” to be obese. This is most certainly also true for Canada’s Aboriginal population.”