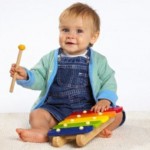 Even infants know to pick one reward over the other – but obviously, as in adults, the one they pick depends on the choices available to them.

Given the highly rewarding nature of food, picking a favourite food over. almost anything else appears the natural choice. Thus food reinforcement is generally established at an early age and tends to continue throughout life.

One hypothesis is that the development of obesity is due to a lack of access to pleasurable alternatives in one’s environment, thereby increasing the reinforcing value of eating

Now, Kai Ling Kong and colleagues, in a paper published in OBESITY, test the hypothesis that conditioning infants as young as 9-16 months to an cognitively stimulating alternative reinforcer may reduce the appeal of food as the default goto reward.

The researchers studied 27 infants, who were found to have rather high food reinforcing ratios at baseline, half of who were randomised to 6 weeks of a program that provided them with a rich variety of music and playful activities, which encouraged infants and parents to participate at their own level in singing, moving, listening, or exploring musical instruments. Participating parents and infants attended weekly, 45-min classes as a group for 6 weeks and parents were encouraged to listen and sing together with their infants at home during everyday home activities such as bath time, meal time, and bed time using the CD and instructional song book provided by the program.

The remaining infants in the active control group consisted of weekly, 45-min play dates held during the same 6 weeks as the music group and were provided with a variety of age appropriate toys (no musical toys) and books for participating parents and infants to play with and enjoy during everyday home activities such as bath time, meal time, and bed time using the toy provided by the program.
The reinforcing value of food and music was assessed using a computerized task by having infants press a mouse button to earn rewards (either food or 10 secs of a song) both before and after the interventions. The song used for both pre- and post-intervention assessments was not used in the 6-week music program to avoid familiarity and biases.
While the researchers found a significant decrease in the food reinforcing ratio (a measure of food preference) for the infants in the music group, the food reinforcing ratio in the control group actually increased.
As the authors note,

“Our findings provide initial evidence that alternatives to food may be cultivated at a young age to alter the reinforcing value of food in children who are strongly motivated to eat…..Interventions targeting non-food behavior may be a new and promising avenue for the prevention of obesity in infants.“

Obviously, music may only be one of several possible cognitively stimulating alternatives to eating and one would certainly want to see if the effect seen in this short-term study is indeed durable over time.
Nevertheless, it seems that in infants as in adults – if you want to reduce the relative reward from food you have to provide an alternative that is at least as if not more rewarding.
@DrSharma
Edmonton, AB