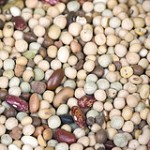 Generally speaking, I am wary of ‘magical’ properties of foods.

Humans have certainly evolved to survive on a wide range of foods and diets, which is why, as a species, we have managed to live in virtually every climate and geographic corner of this planet.

Nevertheless, nutrition science has taught us much about how exactly certain foods or nutrients affect metabolism in ways that other foods may not.

One food that may not have yet received the attention it deserves in this regard are pulses, incidently a staple of many traditional diets – for e.g. in India, no meal is complete without a ‘dal’ dish – in fact, ‘dal-roti’ is a widely accepted colloquial term for ‘food’.

It also turns out that pulses are one of Canada’s major ‘cash crops’ (who would have guessed?).

For readers wanting to learn more about the potential health benefits of eating pulses, I wish to point you to a recent review article by Christopher Marinangeli and Peter Jones from the Richardson Centre for Functional Foods and Nutraceuticals, Winnipeg, Manitoba, published in the British Journal of Nutrition.

The paper deals in depth with the effect of pulse grains on energy expenditure, substrate oxidation, body composition, fat deposition and satiety.

These effects are mediated by a wide range of known components of pulse grains, including pulse-derived fibre and resistant starch, have been shown to alter energy expenditure, substrate trafficking and fat oxidation as well as visceral adipose deposition. The high content of amino acids like arginine and glutamine may produce thermogenic effects. Finally, evidence suggests that pulse-derived fibres, trypsin inhibitors and lectins may reduce food intake by inducing satiety via facilitating and prolonging cholecystokinin secretion.

However, the authors also point out that many of these effects have so far only been demonstrated in rather small experimental (efficacy) studies with notably few high-quality mechanistic studies, not to mention the lack of clinical ‘feeding’ studies.

Nevertheless, pulse grains may represent an understudied nutrient and energy source that could potentially assist both in the prevention and management of obesity.

Even before such data is available I would not be surprised to see pulses declared as the next ‘super foods’ and supplement stores peddling ‘pulse extracts’ for their putative (and probably widely overblown) health benefits.

On a personal note however, I am all for pulse grains and can personally attest to the satiety enhancing impact of adding pulses to my diet.