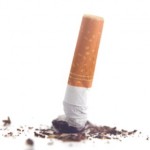 Most people who stop smoking gain weight, on average about 7kg in the long term. Indeed, weight control is one of the most common reasons I hear in my practice for people continuing to smoke.

So how can the weight gain associated with smoking cessation be prevented?

This was the topic of an exhaustive literature analysis published in the Cochrane Database of Systematic Reviews by Amanda Parsons and colleagues from the University of Birmingham, UK.

Using the rigorous Cochrane methodolgy, the authors found evidence that compared to lifestyle interventions alone, pharmacological interventions aimed at reducing post-cessation weight gain resulted in a significant reduction in weight gain at the end of treatment (dexfenfluramine (-2.50 kg), fluoxetine (-0.80 kg], phenylpropanolamine (-0.50 kg), naltrexone (-0.76 kg). However, there was no evidence of any maintenance of these effects at 6 or 12 months after treatment.

In cases, where the intervention was limited to behavioural advice to control weight, not only was there no reduction in weight gain, there was also a trend towards less abstinence. In contrast, when programmes were individualized, there was reduced weight gain at end of treatment and at 12 months (-2.5 8 kg) without a reduction in abstinence rates. Exercise intervention alone did not limit weight gain at 12 months.

Very low calorie diets (-1.30kg at 12 months) and cognitive behavioural therapy (-5.20 kg at 12 months) were both associated with improved abstinence and reduced weight gain at end of treatment and at long-term follow up.

While both bupropion (-0.76 kg) and fluoxetine (-1.30 kg), when used for smoking cessation, limited post-cessation weight gain at the end of treatment, these effects were not maintained at one year.

Nicotine-replacement treatments resulted in attenuation of post-cessation weight gain (-0.45 kg) at the end of treatment and at 12 months (-0.42 kg).

One study randomized successful quitters to 12 more weeks of varenicline treatment resulting in a weight reduction of 0.71 kg. In three studies, participants taking bupropion gained significantly less weight at the end of treatment than those on varenicline.

Apparently, there were no studies on anti-obesity drugs (sibutramine or orlistat) to prevent post-cessation weight gain.

From this analysis, the authors conclude that general behavioural interventions that fall short of formal CBT are largely ineffective in preventing smoking cessation-related weight gain, and may in fact reduce abstinence.

Currently, there does not appear to be any effective way to curtail the long-term weight gain associated with smoking cessation.

This said, it appears that there is considerable room (and need) for more effective interventions to prevent cessation-associated weight gain.

AMS
Edmonton, Alberta
p.s. interestingly, OBESITY PANACEA also had a post yesterday on the issue of obesity and smoking.