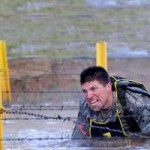 And finally, to conclude this week’s discussion of evidence to support the notion that weight cycling predicts weight (fat) gain especially in normal weight individuals, I turn back to the paper by Dulloo and colleagues published in Obesity Reviews, which quotes these interesting findings in US Rangers:

“…U.S. Army Ranger School where about 12% of weight loss was observed following 8–9 weeks of training in a multi-stressor environment that includes energy deficit. Nindl et al. reported that at week 5 in the post-training recovery phase, body weight had overshot by 5 kg, reflected primarily in large gains in fat mass, and that all the 10 subjects in that study had higher fat mass than before weight lost. Similarly, in another 8 weeks of U.S. Army Ranger training course that consisted of four repeated cycles of restricted energy intake and refeeding, Friedl et al. showed that more weight was regained than was lost after 5 weeks of recovery following training cessation, with substantial fat overshooting (∼4 kg on average) representing an absolute increase of 40% in body fat compared with pre-training levels. From the data obtained in a parallel group of subjects, they showed that hyperphagia peaked at ∼4 weeks post-training, thereby suggesting that hyperphagia was likely persisting over the last week of refeeding, during which body fat had already exceeded baseline levels.”

Obviously, association (even in a prospective cohort) does not prove causality or, for that matter, provide insights into the physiological mechanisms underlying this observation.

All we can conclude, is that these observations in US Rangers (and the other studies cited in Dulloo’s article) are consistent with the notion that weight loss in normal weight individuals can be followed by significant weight gain, often overshooting initial weight.

Incidentally, these findings are also consistent with observational studies in women recovering from anorexia nervosa, famine, cancer survivors and other situations resulting in significant weight loss in normal weight individuals.

Certainly enough evidence to consider a work of caution against “recreational” weight loss, especially in individuals of normal weight.