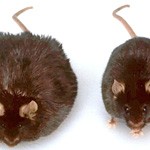 Shortly after a meal, there is a spike in the cerebrospinal fluid concentration of nutrients with direct access to various nutrient-sensitive sites in the brain.

Now a paper by Olof Lagerlöf and colleagues, published in SCIENCE, shows that in mice, the glycosylation enzyme O-GlcNAc transferase (OGT), present in a wide range of neurons involved in energy regulation and feeding behaviours, may play an important role in the satiety response.

Genetic and molecular manipulation of this enzyme in adult mice resulted in marked effects on feeding and weight gain.

Reducing the activity of the enzyme resulted in animals eating much larger meals (but not more often) with substantial gain in fat (but not lean) mass.

In contrast, increasing the activity of this enzyme resulted in reduced food intake during eating episodes.

Not only does it make sense that a molecule known to play a role as a nutrient-sensor would play a role in the central regulation of food intake, but the authors are optimistic that this enzyme may be a target for finding new anti-obesity medications.