To Scope or Not to Scope? 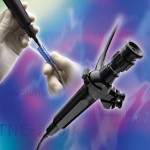 Interestingly, the guidelines make no recommendation on whether or not patients should undergo routine upper GI endoscopy.

A paper just published in OBESITY SURGERY, suggests that this may be a good idea.

Abnormalities were found in 46% patients, the most common findings being gastritis (21%), esophagitis (16%), and hiatal hernias (11%).

Age was the only (albeit marginal) predictor of abnormal endoscopy.

Based on their finding, the authors feel that routine preoperative endoscopy should be performed in all patients prior to bariatric surgery.

Obviously, several caveats apply to these observations: although data was collected prospectively, this is a retrospective analysis. As not all patients undergoing surgery were routinely scoped, it is not clear if there was a selection bias in this sample. Also, it is not clear if the clinical outcomes would have been any different, had these diagnoses been missed prior to surgery.

Nevertheless, the study does highlight an important area of controversy in this field. Would I want my stomach scoped before I commit to bariatric surgery – probably yes (definitely if I had any upper GI symptoms). Is there hard evidence to support this notion – clearly no.

Appreciate any comments from my surgeon readers.