Home » blog » To Band or To Bypass? That is the Question

To Band or To Bypass? That is the Question 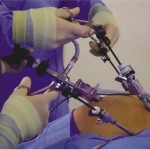 Readers of these pages will likely be familiar with the substantial data demonstrating the remarkable improvements in quality of life, obesity-related health problems and reduced risk of premature death with bariatric surgery.

However, the pros and cons of different types of bariatric surgical procedures remain a matter of opinion and debate.

This uncertainty is now partly addressed in a prospective randomised trial that directly compared the outcomes of laparoscopic adjustable gastric banding and roux-en-Y bypass surgery. The study was conducted by Ninh Nguyen and colleagues from the University of California and was published in this month’s issue of the Annals of Surgery.

The study had a remarkably high follow up rate of around 80-90% up to four years.

The percent of excess weight loss at four years was higher in the gastric bypass group (68% vs. 45% and treatment failure occurred in 0% of bypass patients but in around 17% of patients who underwent gastric banding. Interestingly, male gender appeared to be a predictor of poor weight loss after gastric banding but not bypass.

At 1-year postsurgery, quality of life improved in both groups to that of US norms.

Overall, the study clearly shows that both laparoscopic gastric bypass and gastric banding are safe and effective approaches for the treatment of severe obesity.

While gastric bypass clearly resulted in better weight loss, it was, however, also was associated with more perioperative and late complications and a higher 30-day readmission rate. There were no deaths at 90 days in either group.

In contrast, while banding was clearly safer and had significantly fewer perioperative and medium-term complications, there was a wide variation in weight loss with almost 1 in 5 patients considered a treatment failure, some requiring reoperation or conversion to bypass.

Thus, there are significant differences between these procedures that need to be taken into consideration when counseling patients – while one procedure produces more consistent weight loss but has a higher risk of complications, the other has less complications but also delivers less weight loss.

These of course are averages – for a given individual, results with one procedure may well surpass those that could be achieved with the other, but unfortunately, there is currently no way to predict which patient will do better with which procedure (aside from the slight caveat around male sex with banding).

The bottom line is that both procedures appear safe and effective – choosing the right procedure for the right patient will likely remain a matter of opinion and debate in the foreseeable future.