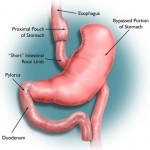 A rapidly accumulating body of evidence supports the profound impact of bariatric surgery on patients with type 2 diabetes, often resulting in complete resolution of this condition.

Two of the key mechanisms by which bariatric surgery improves glucose control are related to weight loss and to changes in the secretion of gut hormones that influence metabolism. The later may explain why, especially in patients undergoing gastric bypass, type 2 diabetes can markedly improve within days of undergoing surgery, well before patients lose a significant amount of weight.

A paper by Mousumi Bose and colleagues from Columbia University, published in the Journal of Diabetes
suggests that both mechanisms follow different timelines and may therefore independently contribute to improvements in glucose control after gastric bypass surgery.

While the improvements in fasting glucose and insulin was associated with weight loss up to 12 months, the blunted incretin effects improved at 1 month, but remained unchanged with further weight loss at 6 and 12 months.

The same pattern was observed with the initially blunted incretin (GLP-1 and GIP) levels, early phase insulin secretion, and other parameters of beta-cell function (amylin, proinsulin/insulin), which improved rapidly at 1 month but remained unchanged thereafter.

Clinicians should note that because of the different mechanisms involved in the metabolic changes seen after bariatric surgery, both the time course and magnitude of changes in individual patients may be quite variable and in some cases hard to predict.

Whether or not these findings will eventually guide the specific use of certain types of operations for patients with type 2 diabetes remains to be seen.