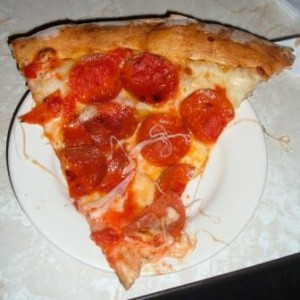 Obesity is commonly associated with hypertension and blood pressure in obese individuals is exquisitely sensitive to salt intake. Salt sensitivity in obese individuals may be a consequence of increased sympathetic activity, decreased responsiveness to atrial natriuretic peptide, activation of the renin-angiotensin system or mechanical pressure on the kidneys that increases sodium reabsorption. Whatever the mechanisms, it has long been well demonstrated that salt restriction (as well as use of diuretics) is particularly effective in lowering blood pressure in obese hypertensive individuals.

Salt intake is therefore very much relevant to the health of anyone struggling with overweight or obesity. The Canadian Obesity Network, therefore joined hands with two other Networks of Centres of Excellence (the Canadian Stroke Network and the Advanced Foods and Materials Network) in awarding the 2009 Canadian “Salt Lick Award” to a major source of excess salt in our diet – PIZZA!

As noted in the press release, pizza delivers a wallop of blood-pressure raising sodium in every slice.

The level of sodium in a couple of pieces of pizza can far exceed the recommended daily intake for adults of 1,500 mg. as well as the Upper Tolerable Limit of 2,300 mg. of sodium.

In fact, so many examples of sodium-laden pizza products are available across the country that the triumvirate of health-focused networks bestowed the Salt Lick Award on the pizza industry as a whole. Consider these examples, based on a scan of nutritional information posted on pizza makers’ own websites:

The three national networks are calling for increased awareness of the impact of high-sodium foods and the need to reduce the sodium content in fast foods and restaurant meals. The first “Salt Lick Award” was given to A&W for their “Chubby Junior” Meal, a fast food option that, one year later, still contains 1,910 milligrams of sodium.

“The onus is on the food processing industry to cut back on sodium in processed meats and cheese used to make pizza,” says Dr. Kevin Willis, a Canadian Stroke Network director and spokesman on the issue. “Action is urgently needed.”

In the meantime, pizza should only be consumed as an occasional treat. When ordering pizza, avoid processed meats, ask for little or no cheese, and limit the number of slices.

In addition, consumers need to consider that not all pizza is created equal. For example, while two slices (292 grams) of Pepperoni Lover’s from Pizza Hut contains 3,000 mg of sodium, two slices (209 grams) of Vegetarian pizza from East Side Mario’s contains 723 mg of sodium and two slices (208 grams) of thin crust Beef Taco pizza from Panago contains a mere 260 mg of sodium. “There are better choices out there and I encourage consumers to do their homework. It only takes five minutes to look online for the nutritional information of any fast-food option and to make a healthier choice,” says Dr. Willis.

The “Salt Lick” award coincides with World Salt Awareness Week – an effort by some 20 countries around the world to highlight the excessive amounts of salt in fast-food and restaurant fare.