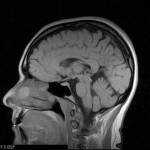 Some readers may recall earlier studies on the increased risk for dementia associated with increased body weight.

A new study, by Cyrus Raji and colleagues from the Universities of California and Pittsburgh, just published in Human Brain Mapping, finds a significant decrease in brain volume in overweight and obese elderly individuals despite largely normal cognitive function.

The researchers used sophisticated morphometric methods to examine grey and white matter volume differences in MRI scans from 94 elderly subjects who remained cognitively normal for at least 5 years after their scan.

After correcting for various covariates including age, gender, race as well as fasting plasma insulin levels and and Type 2 Diabetes Mellitus increased BMI was associated with with atrophy in frontal, temporal, and subcortical brain regions.

Specifically, in individuals with a BMI >/= 30, atrophy was found in the frontal lobes, anterior cingulate gyrus, hippocampus, and thalamus compared with individuals with a normal BMI (18.5-25). These parts of the brain are particularly important for planning and for memory.

Whether or not subjects actually had clinically relevant defects in brain function was not examined in this study. Furthermore, this cross-sectional study does not provide any causal or mechanistic insights into this relationship.

Obviously, whether or not these findings of brain atrophy can be prevented by weight loss also remains to be seen.

Thus, while this paper is sure to get wide publicity in the media, the clinical relevance and implications of these findings remain obscure. Nevertheless, even subtle deficits in planning and memory, if present in elderly individuals with obesity, can potentially affect their ability to plan meals or follow complicated diet plans – something that may (if confirmed in other studies) have to be considered in counseling such patients.