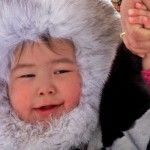 Indigenous populations in most Westernised countries are well known to be particularly susceptible to obesity – the same can be certainly be said for Canada’s high Arctic Inuit population.

In a study just published online this week in the International Journal of Circumpolar Health, Tracey Galloway and colleagues from the University of Toronto and Montreal’s McGill University present results from the Nunavut Inuit Child Health Survey, a study in preschool-aged Canadian Inuit children.

As part of a larger study of population health across the Canadian High Arctic, the survey collected growth and nutrition data on 388 children aged 3 to 5 years.

While mean height-for-age was comparable, body mass index z-scores were significantly greater than a standard US reference population for all age and sex categories.

The overall prevalence of overweight was 50.8%, with significantly more boys (57.1%) than girls (45.2%) in the overweight category.

Although, the researchers could not find a definite explanation for the increased obesity risk in any of the biological, socio-economic and dietary factors, including birth weight, breastfeeding, day care attendance, traditional and market food consumption and sweetened beverage consumption in this population, they concede that their sample size may have been too small to detect such associations.

Nevertheless, a recent separate report from this survey, published in CMAJ, shows a high degree of food insecurity and a high prevalence of poverty indicators, both of which have been related to obesity in other populations.

In fact, the data on food insecurity are shocking: nearly 70% of Inuit preschoolers resided in households rated as food insecure. Children from severely food-insecure households experienced times in the past year when they skipped meals (75.8%), went hungry (90.4%) or did not eat for a whole day (60.1%).

In households in which children were moderately food insecure, primary caregivers reported experiencing times in the past year when they worried food would run out (85.1%), when they fed their children less expensive food (95.1%) and when their children did not eat enough because there was no money for food (64.3%).

Whatever the drivers of the childhood obesity epidemic, these new numbers certainly do not spell out a healthy future for Canada’s Northern-most inhabitants.