Home » blog » Weight Gain in the Elderly is OK?

Weight Gain in the Elderly is OK? 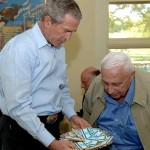 As blogged yesterday, excess weight is a well-established risk factor for mortality. But does this relationship hold across the lifespan? – or in other words – does it matter at what age you first gain weight?

This was the question addressed by Ian Janssen and Eric Bacon from Queen’s University, Kingston, Ontario, who examined the effect of current and midlife obesity status on mortality risk in the elderly, in a paper just out in OBESITY.

Analyses were based on 3,238 participants from the original Framingham Heart Study (FHS) cohort who lived to at least 70 years of age and who had BMI measures from when they were in their 50s.

In practical terms this means that if you are lean most of your life but only gain weight when you get to 70 – you are probably OK.

On the other hand, if you were obese at age 50, but somehow lost the weight by the time you got to 70, your risk was still higher than someone who was never obese.

Remember, as with the obesity paradox for individuals with chronic disease, (unintentional) weight loss in the elderly is never a good prognostic sign.

So, if you make it to 70 without gaining too much excess weight – apparently, it’s time to eat, drink and be merry – and don’t sweat the waistline.