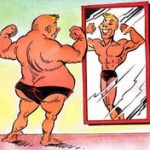 Low income and lower socioeconomic status is widely recognized as a risk factor for a wide range of medical conditions (referred to as the social gradient in health).

Curiously, however, at least in Canada, overweight and obesity appear to be more common in higher-income middle class men than in those who are less well off.

This at least is the result of a new analysis of the 2004 Canadian Community Health Survey, performed by Stefan Kuhle and Paul J. Veugelers of the University of Alberta for Statistics Canada.

The key finding of this study is, that in contrast to women, where the social gradient holds in that lower SES women tend to have more overweight and obesity, in men, there is a strong inverse relationship between SES in that higher income men are apparently at greater risk for excess weight.

This increased risk for obesity in higher-income men is associated with a greater tendency to eat out as well as a lesser likelihood to be smokers. Eating out has been identified as a strong risk factor for weight gain, while smoking cessation is well-known to be associated with weight gain.

Carly Weeks, who interviewed me about these findings for the Globe & Mail, quoted me as follows:

“That’s likely because men and women tend to have vastly different perceptions of their body image and how they should look, according to Arya Sharma, professor of medicine and chair of obesity research and management at the University of Alberta.”

“[Women] are more likely to be dieting and more likely to be working [out] and doing things about their weight,” said Dr. Sharma, who is also the scientific director of the Canadian Obesity Network. “Men are very cavalier about it.”

The reason this report is alarming is because men (rich or poor) are so much less likely to seek obesity treatments than are women. Indeed, our clinic is dominated by overweight and obese women, rather than by the men, who probably need treatment as much if not more, given their greater propensity for abdominal obesity and risk for complications.

How do we get more men to seek obesity treatments? Look forward to any suggestions on this.