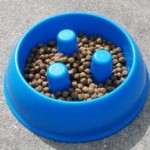 I have previously blogged that the real problem with “fast food” is in the “fast” and not the “food” – if you take the time to slowly chew and savour your junk food, it may not be all that bad (remember: you can also get plenty of sodium, transfats, and extra calories with the best of gourmet cooking).

The notion that eating too fast, especially till you actually feel full, drastically increases your risk for overweight and obesity was nicely demonstrated by Hiroyasu Iso and colleagues from Osaka University in a paper published last month in the British Medical Journal.

Iso and colleagues studied 3287 Japanese adults (1122 men, 2165 women) aged 30-69 who participated in cross-sectional surveys on cardiovascular risk from 2003 to 2006. The questionnaires included validated measures of dietary habits including “eating until full” and “speed of eating”.

Importantly, the “eating-too-fast-till-full” group did not differ from the “not-eating-too-fast-and-not-eating-till-full” group in terms of other variable such as macronutrient composition of the diet, smoking or physical activity. Repeat questionnaires and other studies have shown that these eating behaviour traits stay stable over time – i.e. there appear to be “naturally” slow eaters and “natural” gorgers, the latter being at higher risk of obesity.

Based on these “cross-sectional” data, the big question now is whether or not making a conscious effort to eat slowly (play with your food?) and pushing away the plate before you are entirely full will actually lead to sustained weight loss. That is, of course, assuming that these behaviours can indeed be changed (knowing what I do about behavioural genetics, I believe some skepticism may be in order).

Obviously, both “eating too fast” and “eating till full” are behaviours that, just a few generations ago, would have had significant survival benefits – in fact, these behaviours are two of my six “Natural Laws of Weight Gain” (#3 and #4 to be precise).

The problem of eating too fast has also been recognized by the Alberta Government, which on its “Health U” website provides tips for “Eating on the Run“.

For us clinicians, perhaps, asking our clients to record the time taken for each meal and adding a measure of fullness (Lickert Scale) should become part of our standard recommendations for keeping a food diary.

Unfortunately, the use of “modern technology” that may work for pets (click here for a video of the hilarious “Brake-Fast Doggie Bowl” ), is perhaps not quite the solution for humans.

Nevertheless, as I’ve said before – obesity is a symptom of a society that does not take time to eat!