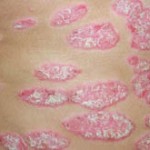 Psoriasis is a chronic, autoimmune disease that causes red, scaly patches to appear on the skin, and affects 2-3% of the population in Western countries.

Several previous reports have linked an association between obesity and psoriasis and studies indicate that obese patients with psoriasis are more difficult to treat.

This complex relationship between posoriasis and excess weight is now reviewed by Bremmer and colleauges from the University of Portland, Oregon, in an article released online by the Journal of the American Academy of Dermatology.

The authors performed a literature review and identified numerous studies that support an association between obesity and psoriasis.

As the authors note in their discussion:

While weight gain has been associated with increase in psoriasis prevalence and symptoms, weight loss has been described to substantially reduce skin lesions and other symptoms of psoriasis, suggesting a causative link in the association between excess weight and psoriasis.

Not only are obese patients with psoriasis more difficult to treat, they also appear to be more likely to experience adverse effects to medications and are less likely to respond favorably to systemic therapies.

Unfortunately, as the authors point out, there is currently little evidence to guide clinicians to the best treatment choices for obese patients with psoriasis.

Given the frequency of psoriasis that I see in my obesity clinic, I can only confirm that this certainly appears to be an area that would warrant further study.