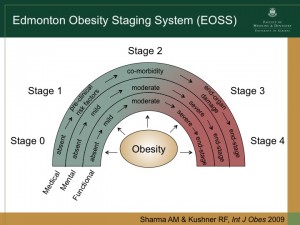 Continuing in my discussion of the disease definition modification checklist developed by the Guidelines International Network (G-I-N) Preventing Overdiagnosis Working Group published in JAMA Internal Medicine,  I turn to the fourth item, which deals with issue of prognostic ability of changing the obesity definition?

Indeed, as pointed out by the authors of the checklist,

“The most important feature of a disease definition is its ability to accurately predict clinically meaningful outcomes.”

This, of course is, where BMI fails hands down.

As we have demonstrated using several large data sets, the ability of BMI to predict mortality is rather limited with almost no relationship between outcomes and BMIs, at least over a rather wide range of BMI levels.

Contrast this to the power of predicting outcomes when using a definition that actually looks at the presence of health impairments, such as the Edmonton Obesity Staging System.

When applying this system, which takes into account the impact of excess weight on mental, physical, and functional health, the prognostic power ranges from virtually no risk (Stage 0) to halving your chances of being alive in 20 years (Stage 3).

Thus, a definition of obesity that actually considers impairments in health have a far greater prognostic power than simply knowing someone’s BMI.

If nothing else, this alone should be a reason to abandon BMI for a more meaningful definition of obesity, that actually considers health and not just size.