Obesity Presumptions #1: The Benefits of Breakfast 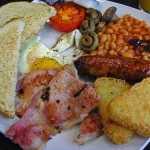 Over the past few posts, I have commented on the “myths” identified in the New England Journal of Medicine Paper.

“…widely accepted beliefs that have neither been proved nor disproved.”

Presumption #1 is that regularly eating breakfast is protective against obesity. This notion is based on the notion that skipping breakfast may lead to overeating later in the day

The authors note that there have been two randomised controlled trials of eating versus skipping breakfast, both showing no overall effect on body weight – they do, however, consider these data as inconclusive.

Obviously, much depends on whether or not eating breakfast actually does reduce caloric consumption during the rest of the day.

This may depend both on nature of the breakfast (a cup of coffee and a bowl of cereal or a muffin may not exactly be the breakfast that provides the desired benefit) and what else is eaten during the course of the day.

In my practice, countless patients have told me that beginning to eat breakfast (after years of skipping) has changed both their energy levels and cravings during the rest of the day – especially in the evenings.

While these may well be dismissed as “anecdotes”, I have heard this far to often to believe that this recommendation is entirely without merit.

It is definitely a strategy worth trying and something I am likely to continue recommending to my patients.

I’d certainly like to hear what my readers have to say about this issue.