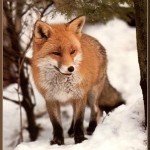 One of the best ways to increase your hunger, slow down metabolism and increases spontaneous physical search activity is to simply stop eating or to even just reduce caloric intake. This is called the adaptive response to fasting and it is of course this hyopthalamic response that limits the long-term effectiveness of weight loss strategies.

A new study by Jose Silva and colleagues from New York’s Rockefeller University, published this week in NATURE identifies forkhead box transcription factor (Fox-a2) as a key molecule in the regulation of this response.

Using mice models, the researchers now showed that the stimulation of the lateral hypothalamic area (the main ‘feeding centre’ that regulates food intake, arousal and motivated behaviour) through the actions of orexin and melanin-concentrating hormone (MCH), neuropeptides that are released during fasting, are regulated by Fox-a2. This transcription factor incidentally is also a target of insulin signaling.

During fasting, Fox-a2 binds to MCH and orexin promoters and stimulates their expression thereby increasing hunger and increasing spontaneous activity.

In fed and in hyperinsulinemic obese mice, insulin signalling leads to nuclear exclusion of Foxa2 and reduced expression of MCH and orexin, thereby decreasing hunger and increasing activity.

Thus, the researchers appear to have identified a key molecule that may prove to be a useful pharmacological target for medications that can help increase spontaneous physical activity and improve health.