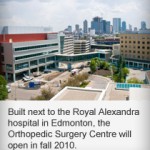 This state-of-the-art 56-bed and 4-theatre facility will exclusively provide services to patients requiring hip and knee surgeries from across northern Alberta.

At capacity, the OSC will perform more than 4,000 procedures annually, certainly a much needed resource for Albertans.

Regular readers of these pages will of course readily appreciate that this increasing demand for hip and knee replacements is primarily driven by one key factor: the increasing prevalence of obesity.

Not only are the vast majority of patients receiving new hips and knees overweight or obese but we also know that excess weight is the key factor that is driving down the age of patients requiring such surgeries.

While I have no doubt that this centre is necessary and will provide high quality orthopedic care to Albertans, I am also positive that we will likely need many more such centres (in Alberta and elsewhere) unless we put the same resources and efforts into preventing and treating obesity.

To put this into perspective: while it is great to see that 4000 Albertans will now receive new hips and knees every year at this centre, let us not forget that less than 400 Albertans will receive bariatric surgery this year, a procedure that could dramatically reduce the need for such joint replacements in the first place (and provide substantial other benefits to patients).

Indeed, many of the almost 100,000 Albertans with severe obesity, who may eventually need new hips or knees, will likely not even qualify for such surgery because they are deemed far too heavy for such operations.

As I have often said before, not spending money on obesity treatments now, only means spending far more on treating the many complications later.