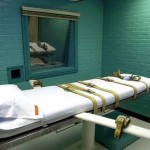 Sometimes I cannot help but wonder just in how many ways the obesity epidemic is affecting so many aspects of our health, economics and social interactions. Here is perhaps the strangest story that I have heard so far:

According to Terry Kiney of the Associated Press, an Ohio death row inmate blames prison food for making him too fat to be executed humanely.

Richard Cooey is scheduled to die by lethal injection Oct. 14 for killing two University of Akron students in 1986.

His attorneys said in a brief filed Tuesday in the 6th U.S. Circuit Court of Appeals in Cincinnati that the state is partly responsible for Cooey’s physical problems that might make his death unnecessarily painful.

The appeal says his obesity could make it difficult for the execution team to find a viable vein for lethal injection.

p.s go to Yoni Freedhoff’s Weighty Matters for a picture of me (and him) after our single bypass!