Are You Living Right Now? 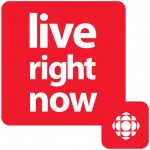 According to an exclusive CBC poll, Canadians say obesity is the country’s number one health issue, rating higher than any other concern-including nutrition and the state of our health care system.

According to a report aired on last night’s The National, the average Canadian may well consume a whole extra meal a day in calories (not surprising, given that the vast majority of Canadians have absolutely no clue about the “currency” of body weight). You can watch the report, which features Yoni Freedhoff by clicking here.

Live Right Now will be supported across all of CBC’s platforms – on radio, television and online with programs such as the following:

Monday, January 3
On The National, Kelly Crowe meets a man who is striving to lose 70 pounds by his wedding in October. And Reg Sherren extends a personal challenge to a group of Canadians to get active.

Tuesday, January 4
World Report on CBC Radio One, and The National look at the role sleep deprivation may or may not play in the obesity epidemic.

At the heart of Live Right Now is an interactive online community, LiveRightNow.ca, with tips, tools, challenges and support to guide Canadians on their journey to better health.

Live Right Now will also include programming such as

VILLAGE ON A DIET: An 11-part television series, which follows residents of Taylor B.C. as they commit to shedding one ton of collective weight in just three months. Village On A Diet premieres Jan. 3 and airs Mondays at 9 p.m. (9:30 NT) on CBC-TV.

THE MILLION POUND CHALLENGE – A national call-to-action, housed on LiveRightNow.ca, that will encourage Canadians to lose one million pounds of collective weight in 6 months. Canadians can pledge to lose weight, track their progress and motivate others to participate via LiveRightNow.ca.

RUN RUN REVOLUTION – An experiential television and online documentary series that will follow a group of middle school-aged children as they prepare for the youth section of the Boston Marathon. The docu-style special will not only transform the lives of the runners, it will bring together families and communities and highlight the importance of raising a healthy generation.

Activities and programming will end in a celebration on CANADA DAY (July 1).

As one of the advisors to the CBC (representing the Canadian Obesity Network), I sincerely hope that Live Right Now will go well beyond simply promoting the “eat less – move more” platitude and truly address the “root causes” of the obesity epidemic including stress, lack of time, sleep deprivation, trauma, mental health problems, and poor caloric awareness and literacy.

I certainly look forward to the many comments from my readers, who I am sure will have plenty to say about this initiative.