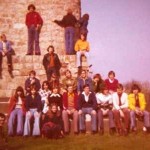 This weekend, I was over in Butzbach, a little town just north of Frankfurt, Germany, for my 30-year highschool reunion.

Around 50 of the former class of ’79 showed up and we had great fun (I haven’t seen any of these folks for at least 10 years, some not once since graduation).

For anyone, who is older (i.e. my age) and has been at a 30-year reunion, this may not come as a surprise, but I was very impressed by how some people had changed so little in their appearance compared to others, who were hardly recognizable.

At least by my standards, 30 years is a pretty long time and it was very interesting to see how many of my former classmates appeared to be very much in their “prime”.

Given that we all graduated around age 20, most of us are rapidly approaching or have just passed age 50. Remember, we graduated before there were computers (the Commodore 64 had just been introduced), let alone the internet or cable TV. Video players and CD players were still a long way off (DVDs were not even a concept), no mobile phones, not even wireless phones at home.

We walked or rode our bikes to school (not a good choice for me, as it was all the way uphill for 1.5 km from my home, so I rather walked). Organized sports was around, but we still had plenty of free time to loiter around the neighbourhood, which was perfectly fine as long as we made it home in time for supper.

Obviously weight gain 30 years later is of interest. Remarkably, the majority seem to have matured quiet nicely. Those, who were heavy set and chunky then, were clearly larger now – but there was no shortage of folks who had pretty much managed to maintain their weights at quite reasonable levels, some appeared even fitter and healthier than they looked 30 years ago.

If this crowd (and the fun we had, with our old class band playing up to get some of us hopping around the dance floor) is any measure, I would say that at least for us, who left highschool in the late 70’s, 50 is probably the new 40 – i.e. of course using as reference the old 40, which I still feel I haven’t actually reached.

Perhaps maintaining that delusion is what is keeping us young – let’s not give it up.

Looking forward to seeing everyone again in five years from now – the beer, the Jaeger Schnitzels and the Appelwoi, will likely still taste the same as 30 years ago.