Obesity in Indian Girls and Women 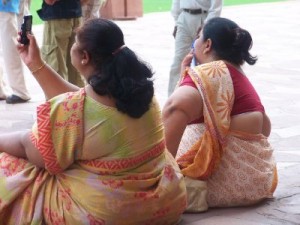 During my current visit to New Delhi, it is hard to overlook the substantial increase in the prevalence of obesity in Indian men and women. While this may not be the phenotype that immediately comes to mind when thinking of India, there is no doubt that obesity prevalence is continuing to rise at an alarming rate.

Recent evidence for this comes from a study published by Chopra and colleagues from New Delhi, published in a recent issue of the European Journal of Clinical Nutrition.

In this systematic review of obesity in Indian girls and women were found to have consistently higher obesity rates than Indian boys or men.

Interestingly enough, abdominal obesity, sometimes referred to as ‘male-pattern’ obesity is in fact more common in Indian women than in men.

Not surprisingly, this increased rate of obesity is reflected in an increasing prevalence of type 2 diabetes that was reported to be as high as 14% in the 2001 National Urban Diabetes Survey.

Clustering of cardiovascular disease risk factors was further increased in post-menopausal women, not least due to a number of factors that may be of particular relevance in Indian women including sedentariness and overly caloric diets.

How exactly these increasing rates of obesity can be addressed remains anyones guess. While it is easy to see the proliferation of “slimming-centres” and “spas” at every corner, as in the West, these centres often provide little long-term help and of course generally do not cater to the folks, who would likely benefit the most.

Needless to say, the medical system in India, is as overwhelmed and insufficiently prepared to address obesity, as we are in the West.

Clearly a challenge if I ever saw one.