How Menopause Turns Women Into SWANs 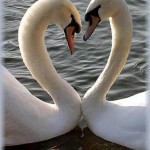 Okay, I just couldn’t resist this headline – I hope my female readers will forgive this tongue-in-cheek title after they read the rest of the story.

The acronym “SWAN” simply refers to the Study of Women’s health Across the Nation (SWAN) Fat Patterning Study, results of which are now published in a paper by Imke Janssen and colleagues from the Rush University Medical Centre in Chicago, in this month’s issue of OBESITY.

This study examined the relationship between the male hormone testosterone and the accumulation of visceral fat (VF) in 359 women (47.2% black), aged 42-60 years randomly selected from the community. VF was measured using computer tomography.

This study suggests that the previously described tendency for women to develop visceral adiposity as they go through menopause is probably related to an increase in biologically active testosterone levels that happens during the menopausal transition.

As readers of these postings are probably well aware, male-pattern abdominal or belly fat deposition is a strong risk factor for the development of diabetes, hypertension, and other cardiometabolic risk factors. In contrast, female-pattern or lower-body obesity appears to be less dangerous and has even been associated with reduced risk of metabolic disease.

This study links the increased bioavailability of the male hormone testosterone to the change in fat patterning observed during menopause.

Interestingly, these higher levels of bioavailable (or bioactive) testosterone after menopause are not due to an increase in testosterone production but rather due to a decrease in sex-hormone binding-globulin (SHGB), possibly resulting from the menopausal decline in estrogen levels (a powerful stimulator of SHBG).

Of course, as a cross-sectional study, it is not possible to completely rule out the fact that other factors may lead to the accumulation of visceral fat, which in turn may lead to hormonal changes like higher insulin levels, which can also reduce SHBG levels.

However, given the fact that fat precursor cells are known to have androgen (testosterone) receptors, the testosterone hypothesis certainly merits consideration.

Whatever the precise mechanism, it certainly appears that menopause increases the risk of visceral fat accumulation and thus brings women closer to the cardiometabolic risk profile normally seen in men.