How Dangerous is Weight Cycling? 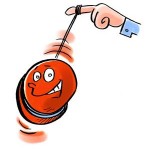 Since Ancel Keys’ starvation experiments in the 1970s, showing that lost weight generally comes back as fat, the notion that weight loss and weight regain, especially if this happens in rapid cycles, may be detrimental to your health has been a rather pervasive notion in the scientific discussion.

In addition, there is considerable animal evidence showing that weight cycling can increase abdominal fat, insulin resistance, and elevate blood pressure, further suggesting that losing weight only to regain it may not be all that healthy.

On the other hand, even relatively short-term reduction in body weight (over a couple of years as in the Diabetes Prevention Study) has been show to have a ‘legacy effect’, with a reduced metabolic risk, even years after most of this weight has been regained.

Thus, in short, whether or not losing weight, only to put it back on, harbours health risks, is one of those ongoing ‘debates’ with passionate and vehement ‘opinions’ on both sides.

Those, in the ‘weight-cycling-is-harmless’ camp, will probably feel vindicated by a recent paper from Victoria Stevens and colleagues from the American Cancer Society, published in the American Journal of Epidemiology.

The researchers examined the relationship between self-reported weight cycling and death among 55,983 men and 66,655 women in the Cancer Prevention Study II Nutrition Cohort from 1992 to 2008.

They defined a weight cycle as “an intentional loss of 10 or more pounds (≥4.5 kg) followed by regain of that weight“. Participants were asked to report their lifetime number of weight cycles at enrollment in 1992.

When the models were adjusted for age only, weight cycling was positively associated with a small, albeit significant increased risk for mortality.

Thus, the authors conclude that their results do not support an increased risk of mortality associated with weight cycling.

While one may quibble with the reliability and value of ‘self-reported’ weight cycling, perhaps the more important issue is whether or not the researchers were actually correct in adjusting for BMI. It would after all not be unreasonable to suspect that people with higher BMI levels are in fact the ones that are most likely to weight cycle. In fact, there are some people who passionately believe that most of the relationship between increased mortality and death may simply be attributable to ‘failed’ weight loss attempts.

As always with such studies, folks who think weight cycling is harmless, will point to this study to prove their point. Those, who believe that weight cycling is the root of all evil, will criticize the science and dismiss this study as flawed and inconsistent with ‘experimental’ evidence.

Whatever the case, there is no doubt that losing weight, simply to put it back on, even if it does not kill you outright, may well result in frustration, disappointment, and perhaps poor self-esteem – not exactly outcomes that one would consider entirely ‘harmless’.

I am still inclined to favour the notion that the only weight loss that matters is the weight that you keep off, fully recognising that in the end, health is determined by far more than by numbers on the scale.