Hindsight: Physiology and Pathophysiology of the Adipose Tissue Renin-Angiotensin System 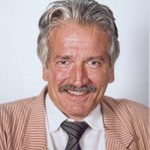 Prof. Raymond Négrel, Director of the Faculty of Sciences, University of Nice-Sophia Antipolis.

Following our 1999 report on the existence of a local renin-angiotensin system in human adipose tissue, we thought it appropriate to write a review on the now rapidly accumulating evidence from human and animal studies on the physiology and potential health-related effects of this system, especially in relationship to cardiometabolic problems (although this term had yet to coined).

So, in 2000, I invited Raymond Negrel from the Centre de Biochimie, Université de Nice-Sophia Antipolis, Nice, France, to join Stefan Engeli and myself in co-authoring this paper for HYPERTENSION.

At the time, renin-angiotensin system had already long been recognized as an important regulator of systemic blood pressure and renal electrolyte homeostasis. In addition, it had become evident that local renin-angiotensin systems in a wide range of tissues, including the heart, blood vessels, and the brain, may play a role in pathological changes of organ structure and function by modulating gene expression, growth, fibrosis, and inflammatory response.

With regard to the function of this system in adipose tissue, we reviewed the literature on the emerging evidence for a role in adipogenic differentiation and in the regulation of body weight.

We also discussed how such changes in adipose-tissue renin-angiotensin could affect systemic activity of this system, thereby influencing blood pressure.

We concluded our review by noting that:

“..future studies with more carefully described phenotypes are necessary to conclude whether obesity (by stimulation of adipogenic differentiation) and hypertension are associated with changes of renin-angiotensin system activity in adipose tissue. If so, the physiological relevance of this system in animal models and humans may warrant further interest.”

Stay tuned for future posts on this topic, as my lab began addressing some of these ideas in subsequent studies.

According to Google Scholar, this paper has 312 citations to date.