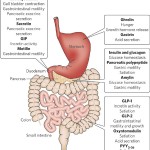 Hunger and satiety are mediated by a range of peripheral signals to the brain.

A new study by Akila de Silva and colleagues from Imperial College London, UK, published in Cell Metabolism, shows that infusion of two gut hormones can reduce food intake and mimic the central effects of a meal in humans.

In addition, the researchers looked at the effect of these gut hormones on hunger and eating behaviour before and after a standardized breakfast and an ad libitum buffet lunch.

Combined infusion of these hormones not only led to similar activation/suppression of brain regions as seen after the standardized meal, but also reduced subsequent energy intake.

Not only does this study provide further insight into how the gut talks to the brain but also provides evidence for the involvement of these hormones in ingestive behaviour.

Whether or not such insights can be harnessed to provide better treatments for obesity remains to be seen.

p.s. Hat tip to Bill Colmers for alerting me to this article