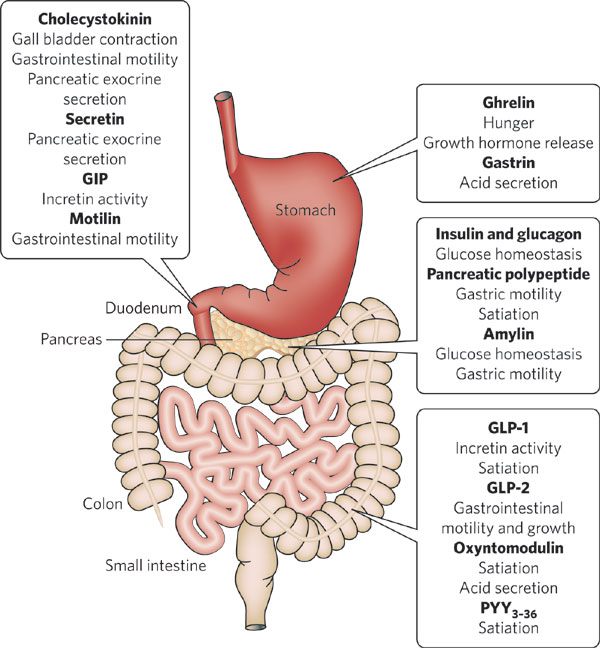 GLP-1 is a gut hormone released from intestinal L-cells in response to food intake. Natural GLP-1 has a half-life of about 2 mins and is degraded primarily through the action of dipeptidyl peptidase-4 (DPP-IV).

In this study, 306 patients with type 2 diabetes inadequately controlled with metformin (1500 mg) alone were randomly assigned to 8 weeks of double-blind subcutaneous treatment with placebo or taspoglutide, either 5, 10, or 20 mg once weekly or 10 or 20 mg once every 2 weeks, and followed for 4 additional weeks. All patients received their previously established dose of metformin throughout the study.

Subjects on all doses of taspoglutide had significantly greater reductions in A1C (by ~1%) but also lost ~2 kg body weight (or ~ half a lb/week).

The most common adverse event was dose-dependent, transient, mild-to-moderate nausea.

This study further confirms that targeting GLP-1, in addition to improving glycemic control, can have beneficial effects on body weight – clearly a significant and potentially important advantage over conventional diabetes treatments.

It will be of interest to see how taspoglutide performs in studies specifically designed for weight loss (i.e. including behavioural interventions like energy restriction and exercise) not only in type 2 diabetes but also in non-diabetic obese patients.