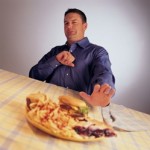 Binge Eating Disorder (BED) can be diagnosed in around 20-40% of patients presenting with severe obesity in obesity programs.

This disorder is characterized by uncontrolled episodic consumption of large quantities of food, generally associated with psychological symptoms of guilt and despair.

Whether or not BED is also associated with physical symptoms is less well studied.

This question was recently examined by Cremonini and colleagues from the Mayo Clinic, Rochester, MN, USA published in last month’s issue of the International Journal of Obesity.

From this study it appears that BED is significantly associated with both upper and lower GI symptoms in the general population, independent of the level of obesity.