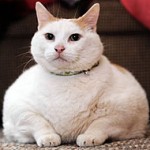 Last week I blogged about fat chicken. Today’s blog is about fat cats – French fat cats, to be precise.

To be even more exact, this study looks at the prevalence of overweight and obesity in otherwise healthy urban cats presented for vaccination at the National Veterinary School of Alfort, France. The cats were examined between March and June 2006 and the study was published by Laurence Colliard and colleagues in the Journal of Feline Medicine & Surgery earlier this year.

Risk factors for excess weight were the cat’s age, neutering (both sexes), male sex, and underestimation of the cat’s body condition by owners. With regard to the latter, it appears that owners who thought that their cats were of normal weight or even underweight tended to have more overweight or obese cats (doesn’t this remind us of parents who can’t believe their kids are overweight?).

Purebred and longhair cats had a lower risk for obesity. Persians were over-represented in purebred cats and none were obese.

Interestingly, the authors report that only cats living in one-kid households were lean – so if you want a lean cat, you may want to also have a kid to keep it company (or an ALF?).