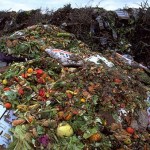 Here is now another spin to this idea from a study by Kevin Hall and colleagues from the US National Institutes of Health, Bethesda, Maryland, just published in PLoS.

Hall and colleagues calculated the energy content of nationwide food waste from the difference between the US food supply and the food consumed by the population. The latter was estimated using a validated mathematical model of metabolism relating body weight to the amount of food eaten.

Their calculations show that the US per capita food waste has progressively increased by ~50% since 1974 reaching more than 1400 kcal per person per day or 150 trillion kcal per year (enough to feed ~150 Million additional people).

They further estimate that food waste now accounts for more than one quarter of the total freshwater consumption in the US and ~300 million barrels of oil per year (or ~1/3 of Alberta’s annual oil production).

In addition to the methane and CO2 emissions from the production of this food that no one needs, even more of these gases are produced as the food decomposes in landfills.

The researchers speculate that this increased availability of cheap food creates a “push” effect (now that we’ve gone to the trouble of producing it, let’s make sure it gets eaten), that promotes caloric overconsumption and the development of obesity.

As further pointed out in a discussion of this article in the ECONOMIST,

“The cheaper food is, the more likely it is to be thrown away even before it is sold to someone who might actually eat it. Such supply-chain waste can be built into the price, and usually makes economic sense. Throwing away leftovers is often better business than risking running out of stock. Yet any waste of a valuable resource is offensive at a visceral level.“

Hat tip to Kavita for drawing my attention to this article